An Army Veteran’s Journey to Better Himself through Education

Some text as placeholder. In real life you can have the elements you have chosen. Like, text, images, lists, etc.
Success
Notice 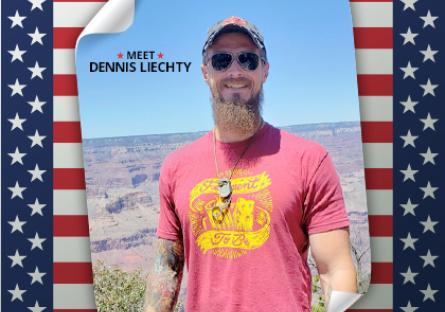 An Army Veteran’s Journey to Better Himself through Education

Before becoming the Rio Salado student that Dennis Liechty is today, he was in the military for six years. He started his military career in the infantry, where he was excited to be a part of the action. Through his six years he became a machine gunner, worked administratively and ultimately became a sergeant on his tour in Iraq.

After the military, Liechty found a job in security, which he really enjoyed, that allowed him to travel overseas. But with the impending arrival of his son and his wife finding a position in Arizona, he quit his job to be a stay-at-home dad.

Liechty says that “there is a lot of busy time and there’s a lot of down time” in his experience as a stay-at-home dad. He wanted to fill his time with something that made him feel instant gratification and also put to use the benefits he earned while being in the Army.

Working overseas, Liechty was exposed to many different languages including French. This led him to want to learn more about the language.

Using the GI Bill®, which provides education benefits to eligible veterans, Liechty decided to enroll in an Associate in Arts degree program. Focusing on French electives within his program at Rio, he was able to finish several electives in an area of interest rather quickly. Now, Dennis says he has decided to “continue on with the education to better himself.”

Liechty comments that as a 37-year-old, with his last educational experience being in high school, he has found learning from home to be an interesting experience. “The nice thing (about Rio) is that I get to work at my own pace and I often like to work ahead,” says Liechty. As a stay-at-home dad, he especially appreciates being able to “knock out” his work when he can and the freedom that Rio gives him.

Liechty prefers to take a more “scenic route” with his time at Rio to explore what he’s interested in and even is taking a child development class to understand his son better. As he works toward finishing his associate degree with Rio and continues to enjoy the journey that comes along with it he says,“you can always learn more than you did the day before.”

With the support of his wife and the motivation from his son, Liechty plans on moving on to a four-year university and ultimately starting his own woodworking business, where his passion lies.

After acknowledging that the transition from being in the military to finding a career is very challenging, Liechty’s’ advice to other veterans is, “don’t be afraid to try a couple different things until you find what you’re really passionate about... not everything is a straight line.”

November is Military Family Appreciation Month. Rio recognizes the unique challenges and sacrifices of all military and veteran families. We have advisors who are with you and for you from start to finish. If you or someone you know is interested in the programs available to students, please contact 480-517-8153 or visit www.riosalado.edu/military-and-veteran-services for more information.

GI Bill® is a registered trademark of the U.S. Department of Veterans Affairs (VA). More information about education benefits offered by VA is available at the official U.S. government https://www.benefits.va.gov/gibill/