Some text as placeholder. In real life you can have the elements you have chosen. Like, text, images, lists, etc.
Press Releases
Notice 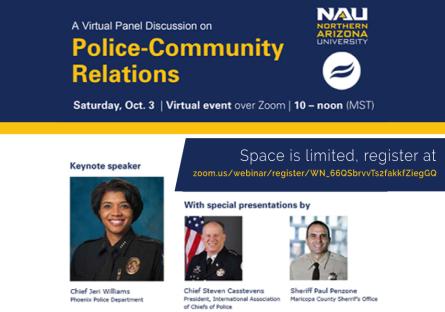 Topics include police-community relations in the Valley, the use of force, de-escalation training and issues of unconscious bias.

The event will feature a keynote presentation from City of Phoenix Police Chief Jeri Williams, who will be joined by the International Association of Chiefs of Police President, Chief Steven Casstevens and Maricopa County Sheriff Paul Penzone.

“This event comes at a critical time in our nation as we see demands for police reform and defunding of police services,” said Angela Kwan, faculty chair of Rio Salado’s Administration of Justice Studies program.

“There is a hyphen between police-community relations for a purpose. Police departments cannot build positive relations without community input, partnership and more importantly— trust,” said Kwan who is a retired Phoenix Police Department lieutenant and one of the event coordinators.

The event will also include a facilitated panel discussion moderated by Dr. William Crawford, president of the Arizona Justice Educators Association (AJEA), who will be joined by these Valley law enforcement leaders:

“Our hope is this event will foster engagement among students, faculty and the other communities we serve to have difficult conversations about racial justice and the impacts of policing within our communities of color and with marginalized populations.

The event is open to the public, however there will be a limit to the number of attendees.