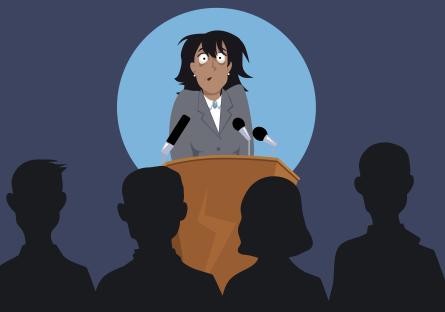 Do you have Glossophobia? It's one of the most common phobias in the world: the fear of public speaking. Surveys have found that a larger percentage of people fear public speaking more than spiders, snakes, or even death itself. Despite its fearsome reputation, public speaking is a very valuable (and often necessary) skill to possess. Being able to speak in front of people with confidence and clarity is a skill that can get you far in a wide variety of fields.

Whether you’ve got a bad case of glossophobia or just feel a little rusty speaking in front of your peers, here are a few tips you can use to help you feel more assured when it’s your turn to speak up.

When you’re planning your presentation or speech, imagine that YOU are the audience. Would you find this compelling? Does this content make sense to you? Consider how it’ll be received and what you can do to make it as interesting and concise as possible.

Preparation is essential for good public speaking. Rehearse at home; record yourself on a phone and hear how it sounds. If you have a friend you can practice on as an audience, use that to your advantage. You’ll also want to consider the physical environment you’re going to talk in. Are you familiar with the room/stage? Can you walk around or is it a restrictive space? How are the acoustics? Will you be using a microphone? If you don’t know these answers, get to the space before your presentation and get a feel for it. If there’s a sound person, ask them about the microphones so you know what you shouldn’t do with them.

Talk With Your Hands (But Not Too Loudly)

“What should I do with my hands?” This is one of the most common questions public speakers contend with. If you’re nervous, your gut instinct may be to anchor them to a podium, a clicker, or on a table surface but the truth is that incorporating a bit of hand movement into your speaking is less stressful than keeping them planted and still.

The main thing is to keep your hands in the “strike zone”: the area from your shoulders to the top part of your hips. Don’t touch your face, run your fingers through your hair, or fidget above the neck unless you absolutely need to. These kinds of gestures can telegraph nervousness. You also don’t want to sweep your arms too far outward because that can be distracting. Keeping your hand gestures within that strike zone will make your hands less distracting.

Think of your hand gestures as punctuation. Do you have three points you’re making in your speech? Count them out on your fingers. Want to emphasize a particular point? Putting your hands out from your waist like you’re picking up a large bowl sends that message. Try to avoid pointing at specific people unless engaging with them directly is a part of your presentation; you don’t want folks feeling like they may be put on the spot.

A common trick many stage actors use is focal points. When an actor is addressing the audience they’ll pick an area on the wall behind the audience to focus on: it could be a fixture on the wall, a panel, a railing, anything that’s clearly visible on stage. And then they’ll talk TO that object as though it were a person, directing their attention to it. The reason why this is effective is that the audience will think you’re looking at THEM.

A big mistake many public speakers make is being afraid to make eye contact with the audience, so they keep shifting their focus. The audience can see that nervous energy and makes them uncomfortable, which in turn makes the speaker uncomfortable once they’ve realized they’re losing the crowd, and it becomes a vicious circle. Using focal points creates the illusion of intimacy, and it also helps keep you calm and focused.

If you’re addressing a large room, it can be helpful to have multiple focal points: a left, right, and center “audience” to address. You can also use this technique to rehearse a speech. Talk to a specific spot on a wall in your home. Yes, you may feel a little self-conscious about it at first but what this training does is get you used to speaking with focus.

Breathe In, Breathe Out

Feeling stressed before a speech? Focus on your breathing. Take measured, focused breaths. You can relieve a bit of stress by just maintaining a steady rhythm of deep breaths. Once you’re speaking in public, if you feel overwhelmed or nervous take a moment to breathe when the opportunity presents itself. If you’re working off a prepared speech, consider inserting breathing or drinking breaks between longer paragraphs to give yourself a quick moment to collect yourself before moving on.

You’ll also want to think about breathing while writing your speech. Avoid long, dense sentences that may tire you out. If something is hard to say, it could knock the wind out of you.

Put Signposts In Your Speeches

Structure is just as important to the spoken word as it is to the written one. Consider adding signposts to your speeches and presentations. Think of them like bullet points, numbers on a list, or subsections. A signpost verbally indicates “where” you are in a speech to the audience. The best way to do this is to express your thesis early on in the speech and break it down into parts. Maybe your speech is the “five elements of success for our team.” Those five elements are your signposts; each time you get to a new one, going “for our third element of success”-  or whatever number you’re on - signals to the audience that we’re changing tracks to a new topic. It also creates a good kind of suspense by letting people know how much ground is left to cover (like reading a book and seeing how many pages are left to read).

Signposts are also a way to reiterate previous points and review your material as you go. They give you an opportunity to quickly recap a previous item while introducing the next point on your agenda.

Public speaking is a skill, and like all skills it can be taught. There are public speaking classes and organizations like the Toastmasters across the country that can help you improve your public speaking skills. You might also want to consider taking an improv or acting class: you’d be surprised at how many of those performing skills can be seamlessly translated into a business environment.

Nobody Wants To See You Fail

Remember what we said earlier about how strongly many people fear public speaking? This is one of your greatest advantages as a public speaker. You are doing something that a good portion of your audience is TERRIFIED of doing. You already have their respect and admiration for having the gumption to do this in the first place. People fear public speaking because they’re afraid of embarrassing themselves, of being laughed at and/or judged.

The truth is that people want to be entertained, they want to be informed, they don’t want to see YOU fail. If you stumble, what will most likely happen is that you earn their empathy: “Oh, that could have been ME!” The trick is to roll with it when you make mistakes. Don’t apologize, don’t stammer, don’t back up, don’t make a big deal about it. Oftentimes the audience may not even be aware you made an error. A quick self-deprecating joke or a confidently expressed correction (“actually, I meant to say -”) and then moving things forward will keep them on your side. Think of it like taking a long walk; if you trip on something, you get up, dust yourself off, and maintain your forward momentum. To err is human; to bounce back from it is divine.